[If you care not for vulgar language, stop reading.]

Mind you, I know that I am the daughter of a king. By way of Jesus Christ, I am royalty. But I am also common. This I know.

Back when I was a literacy professor, one of the things that I taught were the three aspects of conversation: collaboration, negotiation, and innersubjectivity. The first two you know. To talk with someone, you have work together. To converse, you have to also have someone who is talking and someone who listening. The talker and the listener have to work out who gets to talk and who gets to listen. The first aspect of conversation is the easiest. The second is oft the cause of broken relationships. The third, well, it is not something you can create alone. It actually is created by the first two and by time, culture, race, gender, vocation, and experience.

A while ago, I was talking with someone about this episode of Parenthood. Actually, I hadn't seen it yet, but we both love the show and I didn't mind hearing about it. [After all, I would most likely forget what she told me happen by the time I saw the episode.] So, there she was, talking, and innersubjectivity occurred.

Bonnie-fucking-Bedelia!
Oh, how I laughed.
And I knew.
Bitter the pain.
Deep the longing.
Overwhelming ... the jealousy.
I knew.

Bonnie Bedelia is an amazing actress. She is also the epitome of a mother, of a friend, of a neighbor. The perfection of the moment in the middle of great anguish could only have been carried by Bonnie Bedelia, the actress. Yet she carried the moment because of the women she represents. Always.

The woman I was talking with said the word fucking not against Bonnie, not against the drama, not against anything. It was the utter absurdity, the juxtaposition of Bonnie Bedelia and all she represents with that word.

Being known. Knowing that you are known. Is there anything better?

To me, that is why our Triune God gave us the Psalter. To let us know that we are known.

I mean, two of the three Isaiah passages I quote the most tell us that God calls us, knows us by name.

You whom I have taken
from the ends of the earth,
And called from its remotest parts,
And said to you, "You are My servant,
I have chosen you and not rejected you.
Do not fear, for I am with you;
Do not anxiously look about you, for I am your God.
I will strengthen you, sure I will help you.
Surely I will uphold you with My righteous right hand."
~Isaiah 41:9-10

But now, thus says the Lord,
your Creator, O Jacob,
And He who formed you, Oh Israel,
"Do not fear, for I have redeemed you;
I have called you by name; you are Mine!
When you pass through the waters,
I will be with you;
And through the rivers, they will not overflow you.
When you walk through the fire,
you will not be scorched,
Nor will the flame burn you.
For I am the Lord your God,
The Holy One of Israel, your Savior..."
~Isaiah 43:1-3

I admit that I know some think I am a bit ... overly ... passionate about the Psalter. How much I love reading, praying, and most especially hearing the psalms prayed. I did not used to think this way, be this way. Ironically, I didn't know about the prayers. I never even knew that the psalms were prayers, much less that they were prayers for us, for me, to pray.

While reading Luther, I discovered there was such a thing as praying psalms, that the collection of them is also called the Psalter. I wanted to try praying mostly because Luther seemed so ... passionate ... about doing so. As I have written before, I asked my then pastor how to pray the Psalter and he said to just start.

In doing so, I knew. I knew that I was known. Anger. Sadness. Doubt. Despair. Joy. Peace. Longing. Humility. Awe. Terror. Confusion. Certitude. Faith. Truth. Deception. Greed. Revenge. Life. Death. God knows us. We are known. Every bit of who we are, who we wish we were not, who we want to be, as human beings, as children of God. It is all there for us to pray so that we know that He knows that we are known.

We are known even in our commonness and being so is understood by our Creator.

Would that it were all of God's creation knew that it is known.
This is my desire.
For me.
For you.


Lord, I believe. Help my unbelief! 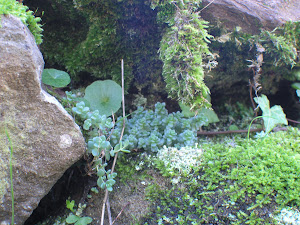